Eleven One Productions unveiled the new poster for its short film REVENGE, INC., today. Check out the Hitchcock-inspired poster art from Natalie Haines. 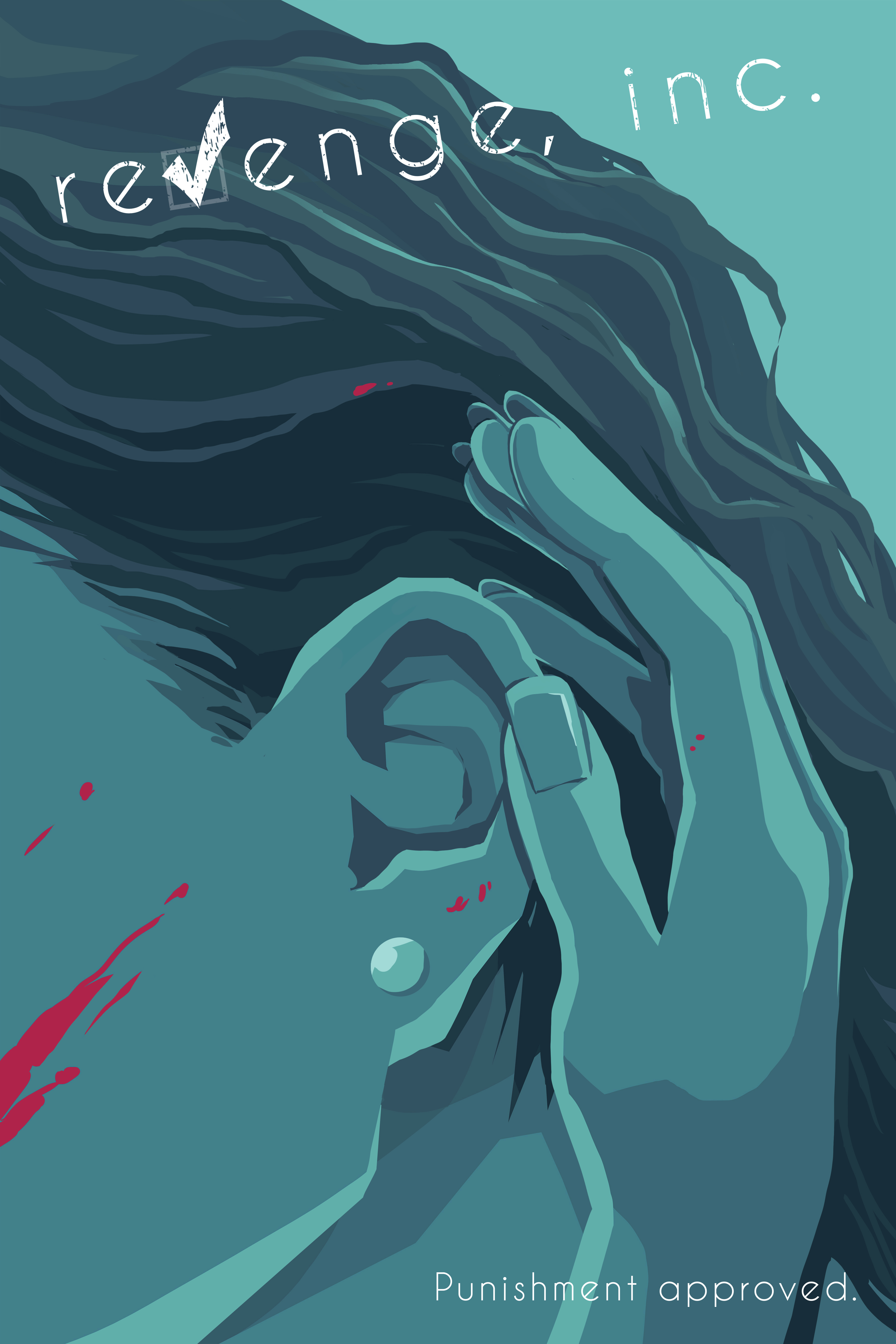 COLUMBUS – Eleven One Productions, a small production company in Columbus, Ohio, has selected “Toys for Tots” for its 2019 giving pledge.

Since it’s beginning in 2015, Eleven One has chosen at least one charity per year to provide services, assistance, or fundraising. Past recipients have included the Ronald McDonald House of Central Ohio, First Responders Face-Off Foundation, and the Columbus Ice Hockey Club. This year adds the celebrated Toys for Tots program, operated by the United States Marine Corps Reserve. Last year, Lima Company was able to provide more than 41,000 toys to almost 14,000 children in Central Ohio.

COLUMBUS – Eleven One Productions welcomes The PVDcast as its “Official Podcast Partner” of the feature film production THE THIRD PERIOD, tentatively set to be filmed in Ohio and Kentucky in the next year.

THE THIRD PERIOD is a character-driven drama set in the world of ice hockey and follows an aging hockey star who must battle his way back after injury to win big in the third period of his life. The film will be produced by Len Hartman of Ohio Film Group, who also wrote and executive produced FREE STATE OF JONES with Matthew McConaughay.

“There were several things that drew me to the project,” said The PVDcast owner and talent John Orlando. “The first thing is that it is a hockey movie. I am a huge hockey fan and film buff. Combine those two passions into one and you’ve automatically got my attention. The second thing is that it is an independent endeavor. Personally, I feel all great art comes from that independent spirit. This is why I end all PVDcast episodes with the slogan, ‘stay righteous and stay independent.'”

The PVDcast is a Columbus-based pop culture podcast with a special affinity for comic books and sports, particularly hockey. It joins RBar Arena, The Three-Legged Mare, Live! Technologies, Giant Eagle, Studio 35 Cinema & Drafthouse,  CD102.5 and The Chiller Ice Rinks as official partners of the film.

“My decision to become involved with the project was largely due to the short film, ‘Olsky,’” said Orlando. “While preparing for my episode with Steph Greegor (who was a guest back in November), I watched ‘Olsky’ as part of my research. Needless to say, I was impressed with the film. I think that the subject matter…hasn’t really been touched upon in other hockey films.”

As a film buff, Orlando sees the potential in Columbus as a place to make more movies.

“I don’t understand why there are not more projects like {this} coming out of Columbus. Ten, fifteen, twenty years ago, if you wanted to make a film, you better be on one of the coasts,” said Orlando. “Given the technological advancements in the movie industry, I feel that’s not the case anymore. The Midwest has lots of fascinating stories and talented creators and they should be represented in the film industry.”

“Another great benefit is that Columbus gets more recognition for being a city that supports the arts,” he said. “A vibrant artistic community is absolutely necessary to a city. Without an artistic community, people are not exposed to new ideas, cultures, philosophies and do not have a chance to express themselves. In today’s society, the expression of ideas is more crucial now than ever before in our nation’s history.”

The PVDcast will feature extensive interviews with players, actors, and crew associated with the film throughout its production. You can visit “The Third Period” or The PVDcast for more information and to stay up-to-date with the film.

“I am really looking forward to talking to the many talented people connected to ‘The Third Period,'” said Orlando. “I enjoy talking with people who are passionate about their projects, which is why I started The PVDcast.”

The Third Period Exceeds Goal for First Round of Funding

COLUMBUS, OH (AUGUST 6, 2018) – Eleven One Productions today announced the development fundraising campaign for The Third Period film has raised $42,900 – exceeding its goal by more than $12,000.  Key corporate partners including LIVE! Technologies and Giant Eagle, provided significant support in addition to the dozens of corporate and individual donors.

The movie is set to film in Columbus beginning June 2019.

“It’s a tremendous milestone to exceed our first fundraising benchmark,” Greegor said. “Not only does it allow us to properly lay the foundation for this film, it shows the tremendous support this project is building from local businesses, hockey fans and the entire central Ohio community.  We have a lot of work to do before the first scene is shot, but we’re well on our way to bringing a little Hollywood to Columbus.”

To date, nine local businesses have signed on as film partners through a combination of monetary and in-kind donations. LIVE! Technologies is now the official live production partner and Platinum sponsor of the film; Giant Eagle is the official catering partner and Gold sponsor; and Michael Darr of RBar Arena and Three-Legged Mare is the official bar & restaurant partner. Other partners include CD102.5, Studio 35 Cinema & Drafthouse, The Chiller Ice Rinks, Pendulum PR and Creative Strategies and The Reel Law Firm.

The production has also gleaned local support from the Greater Columbus Film Commission, Experience Columbus, GCAC, and others.

“As the sales and marketing organization for the Columbus Region, we appreciate how the film will shine a positive light on our city, including its sports, restaurants and shopping,” said Brian Ross, President and CEO of Experience Columbus, in a letter of support for the film. “The film could serve as ‘advertising’ for our thriving community and build awareness of Columbus as an attractive destination for visitors, conventions and sporting events. Also, the economic impact to Columbus and Franklin County during six weeks of filming in 2019 will be significant.”

Economic impact for Columbus would be approximately $3.5 million with the creation of close to 170 jobs locally and regionally.

“This is a project that not only the Columbus hockey and arts communities can rally around, but area businesses need to understand the economic impact of a movie of this scale,” said Live! Technologies Executive Producer Michael Farrell. “It’s not everyday film projects of this scale are spearheaded in Columbus. We appreciate how Steph has built this film around the local community, engaged area businesses and cast local talent to be a part of the movie.”

The Third Period has also identified three charities for which the team will raise money throughout production. Charity partners include First Responder Faceoff Foundation, Columbus Ice Hockey Club and CD 102.5’s For the Kids.  The first official fundraiser event is happening now at RBar in the Arena District. Throughout the month of August, all purchases can be rounded up to the nearest dollar and 100 percent of those monies will be divided equally between the charities.

More information about this weekend visit will be posted on the film’s website in the coming weeks.

The Third Period will be produced by Len Hartman, an award-winning screenwriter and film producer who worked on projects including Free State of Jones, a Civil War era historical drama starring Matthew McConaughey. Ohio Film Group is set to provide post-production services.

For more information on the film, visit http://www.thirdperiodfilm.com.

The Third Period is the first feature-length hockey film in U.S. history to be written, produced and directed by a woman – former Fox Sports Ohio writer Steph Greegor

“I think it’s incredibly important that real hockey players are in this film,” Greegor said. “Hockey fans are very particular about what they see on film. They know when it’s real and they know when you’re faking it. So, there’s no faking here. We have legit players, who also have entertainment experience.”

Clohessy is a former Division I soccer player for Central Connecticut State University, who also played a couple years of hockey and is now training with a pro hockey coach.

“I got some of the skating genes from my mom (figure skater Catherine Erhardt)…so I grew up skating a lot,” said Clohessy. “Hockey is a sport that I’ve always loved. It’s exciting that I’m getting back into it. This is a skill set that takes immense dedication, and that’s something that I look forward to honing and perfecting to the best of my ability before we start shooting.”

For Clohessy acting is a family business. He grew up going to set with his father, actor Robert Clohessy (Blue Bloods, The Avengers). Clohessy attended the Purchase Conservatory of Acting in NY, played prime time T.V. guest star roles as well as and is a current Wilhelmina model. You can spot him on the hit T.V. show Quantico during the second half of this season.

“I’m really excited for Steph. I know Steph loves hockey, and I think it will give it a better perspective other than all of the male-centric sports films that have come out,” said Clohessy, who was especially impressed with The Third Period’s script, also written by Greegor. “I think Steph has a really great script here that’s really character-driven and isn’t just about sports, but how through sports you can overcome the hardest struggles in life. I think that’s something that’s really unique about the script that I’m excited to delve into.”

“I was going through something similar to the main character, Mike Olsky, while I was covering hockey and it absolutely inspired me to write this script,” Greegor said. “Ice hockey is a beautiful sport; precise, fast, and tough. And I wanted to capture that in film. Particularly at a time when the hockey fan base is growing, especially among women and kids. It’s exciting for me, as a woman, to be one of the first helming such a male-dominated arena.”

The Third Period will be produced by Len Hartman, an award-winning screenwriter and film producer who worked on projects including Free State of Jones, a Civil War era historical drama starring Matthew McConaughey. Ohio Film Group will provide post-production services.

The Third Period is set to be filmed in Columbus from June 3 through July 14 of 2019.

For more information on the film, visit the Official Website.

“Soon hockey fans in Columbus will be able to watch more than just Blue Jackets action. The city is going to be the setting of a new independent film called The Third Period.

Steph Greegor, the film’s writer and producer, is a former Fox Sports Ohio journalist who grew to love the game of hockey as she covered the Blue Jackets for five years….”

COLUMBUS – Eleven One Productions is thrilled to have Columbus’ R Bar and Three-Legged Mare join its feature-length film production of THE THIRD PERIOD as its “Official Bar & Restaurant” partner.

R Bar and The Three-Legged Mare are located across from Nationwide Arena in downtown Columbus where THE THIRD PERIOD will commence production during the summer of 2019 with release set for 2020. The character drama is centered in the world of ice hockey and follows an aging hockey star who must battle back after injury to win big in the third period of his life.

The film is being produced by Ohio Film Group and Eleven One Productions.

CASTING IS NOW CLOSED except for hockey players interested in being extras or stunt men in the film. Hockey players can submit as noted below:

Body of Email: Include your hockey experience

An aging hockey star must battle his way back from injury and addiction to win big in the third period of his life.