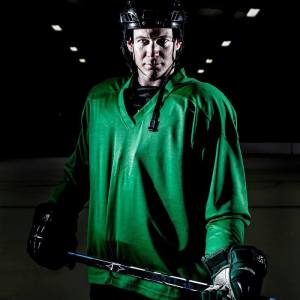 The article was written by Matt Wagner.

“After seeing OLSKY and getting a chance to talk to writer and director Steph Greegor, I was excited to have a chance to ask a few questions to Aaron Massey, the film’s main actor. An Ohio native, he has appeared in several films and TV shows, but had several challenges in taking on the role of Mike Olsky.

So the obvious first question – how intimidating was it to have to not only bulk up for the role, but also learn how to play hockey at the same time?

I didn’t really see it as intimidation, but more so of a challenge. I like to face things head on, and simply put my head down and do whatever needs to be done to fulfill the task at hand, and in this case it was becoming Mike Olsky. We did not have the benefit of months and months of prep or training. I had to utilize the time I had which was just a few weeks to simply learn how to skate. I had never been on the ice before. I come from an athletic background having played college baseball, and football and basketball through high school so I was up for the challenge.”

You can read the rest of the article HERE.